I read a lot. In 2010 I read 110 books and for 2011 I’ve read 113 through Christmas. I read a lot of these books as eBooks and I keep seeing stories about what eReader is better, as if it were a hardware only choice. What about availability of books? What about the cost of books? Surely not all platforms are equal right?

So I did some research and pulled together this infographic based on the 113 books I’ve read so far this year. I wanted to find out how many of those books would have been available as eBooks and what they would have cost on various platforms specifically for Amazon Kindle, Barnes & Noble Nook, Google Books and Apple iBooks. 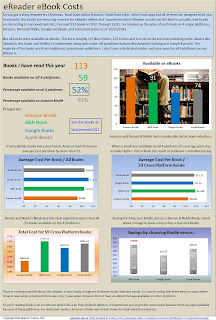 I priced each book as of 12/25/11 figuring folks would grab their shiny new eReaders and buy a book. The results were very clear.

Amazon and Barnes & Noble stood out for book availability with Amazon having 91% of my books available as a eBooks. If you like anything outside of the mainstream Amazon is your best bet with only one of my titles available as an eBook on other platforms but not on Amazon. Both Google and Apple were hit or miss for a lot of titles with only 59 of 113 titles available on all four platforms.

Amazon was the king of pricing hands down. They were never undersold and if you had bought the 59 books available on all 4 platforms on Kindle instead of Nook, you would have saved just about enough money to buy a low end Kindle.

Ever since the last update of Windows Live Writer I’ve had some strange issues Live Writer locks up and crashes and periodically and some posts to Blogger take an extremely long time to post.

I use the Blog This add in for Live Writer to blog from IE9 for most of my posts and I think I’ve found a workaround that seems to mitigate the issues.

If I open Live Writer and leave a blank post open before I start creating posts with the add in, things seem to run much smoother. I haven’t had any shut downs with this method and though some posts still take a while to complete, they always complete.

It’s not ideal but it’s not a tough workaround either. Sadly, prior to this, Live Writer had been incredibly stable for some time.

I’ve decide that I can only prop up 2 evil empires in my life so I’ve decided on Microsoft and Google. All of our PC’s run Windows 7 and either Office 2007 or 2010. I haven’t had time to upgrade all of them to 2010 yet. All of our phones are Android phones.

Microsoft gets: The desktop and the office suite hands down. With Office Live this is a total no brainer. Bing also wins for search on the PC. I’m hooked on the daily pictures. I support Dynamics GP and Google doesn’t compete in ERP so that’s a hands down win. Email with Outlook and note taking with One Note are also locks. Exchange gets my corporate mail.

Google gets: The phone ‘cause Windows Phone 7 isn’t out yet and is copying Apple too much. They also get the blog with Blogger because I have no interest in hosting a WordPress blog and Blogger is much more customizable than any of Microsoft’s blogging options. Google also get’s website analytics. Microsoft is simply non-existent here. Google also gets the nod for RSS reading. Microsoft’s RSS strategy just doesn’t support reading in multiple locations well. Gmail gets my personal mail, mainly for storage size and IMAP compatibility making it easy to use with Outlook.

Apple gets: Nada. I don’t even have Quicktime on my Windows machines. Here’s the thing, I don’t need to carry another device for music, Android runs just fine. I don’t think Apple does a good job of writing Windows software. iTunes is a pig and Steve Jobs is really needy. He keeps needing me to do things his way and that turns me off.

So, my limit is 2. The funny thing is, I don’t see the MS/Google ratio changing much in the near future. Other than search, the other items are really a slam dunk for me. If anything MS could create a great analytics package or web based RSS reader easier than Google will pry Excel or One Note from hands.

With the release of Office live apps I was really excited to be able to be able to move my OneNote files to the web. I had tried this before but the old Small Business option didn’t have enough storage space. The plus to that was that I had an idea of what I was doing. Since this is all new I thought that I would post a little of my experience.

My Old Setup
My old setup was a USB key that all of my OneNote files lived on. All of the files were synced to all of my PC’s by plugging in the USB key. This was actually very convenient for all of the laptops. Rarely does my stuff have to be continuously in sync and if I wanted to ensure absolute synchronization, say before getting on a plane, I could just plug in the USB key.

OneNote Online
That of course is why I was looking forward to maintaining OneNote online. All in all the process was about what I expected. It seems to work fine for new notebooks but it’s still a  little rough around the edges when moving existing data up. For my own safety, I created a new notebook online with the same name as existing notebook and copied each section from the old notebook to the new, online notebook. Then I let the notebook sync online naturally. Warning, it can take a long time.

Most of my notebooks synced fine but a few of them kept throwing errors. Typical errors were that a section was too large or a generic error that the section couldn’t sync. All of them were finally solved, more on that later. Everything is now syncing.

So here are my tips:

I think that’s about it. My OneNote files total about a 1.5 gigs so that should give you an idea of how much data I’m pushing.

Working Anywhere has absolutely nailed the status of hotel bandwidth today. The only thing missed is when my colleague Anthony brings his XBox 360 to hotels for all night racing after the work is done. That absolute kills hotel bandwidth.

If you travel at all, this article is worth a read.